Shermon and the Nazis, a love story.

Ever since we can remember, Shermon Burgess (the Great Aussie Patriot) has been vehemently protesting that there is nothing neo-nazi about his half baked 'movement'. Well, here he is shown on his own page no less directly collaborating with the Nationalist Republican Guard.
There really is no point denying that NRG are nazis Shermon. They're a direct splinter of Melbourne's favourite playground fascists in anarchist drag (Nationalist Alternative) and count amongst it's ranks illustrious members such as Richard 'who ate all the pies?' Whelan and serial Rabbi harasser Neil Luke Erikson (who is a West Heidelberg resident by the way).
At worst this makes you a nazi, Shermon. At best this makes you, and your followers who will roll up on the 4th collaborators.
Historically they get treated the same. 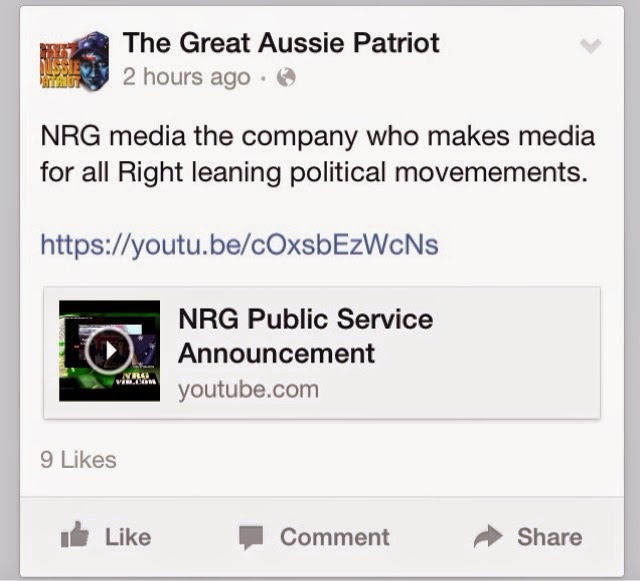 Posted by RezzaAntifa at 16:19 No comments:

Have a look at this screencap from the Patrick O'Sullivan run 'Combat 18 Australia' FB page. Despite there being at least 20 witnesses to Paddy getting the old lemon and sars from the Bendigo Hotel for handing out material promoting the 'Reclaim Australia' rallies, he strenuously denies any previous involvement with Shermon's crew.
He's obviously embarrassed at being dropped like a hot spud by the now utterly discredited Burgess. It's known Burgess has no aversion to working with nutzis, his number one comrades in arms are the NatAlt splitters down at NRG. Patrick is obviously recognized by the anti-Islam racists as a nut now, just like he is by all other nazis.
Must feel low being so utterly isolated Paddy. We certainly hope it does.
Loser.
Anyway, despite these protestations, C18, and all other Melbourne nazis will be present at the racist rallies on April the 4th.
Please turn up to give all in attendance on the other side a swift kick up the arse. 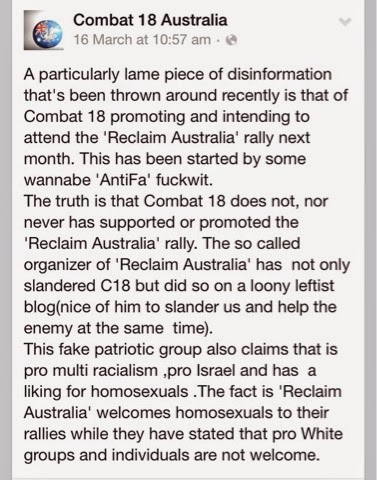 Posted by RezzaAntifa at 20:54 No comments:

You can keep in touch with us on Facebook at:

Posted by RezzaAntifa at 17:43 No comments:

Somehow Ratprick (2nd from left) has managed to surround himself with 4 blokes even uglier than he is!
(Also, congrats on the celebrity endorsement Paddy, I had no idea Ron Weasley was a nutzi)
This is the Combat 18 Melbourne crew. A couple of these lads are based in the Preston area.
Looking forward to seeing you round, Ratprick and the untermensch. 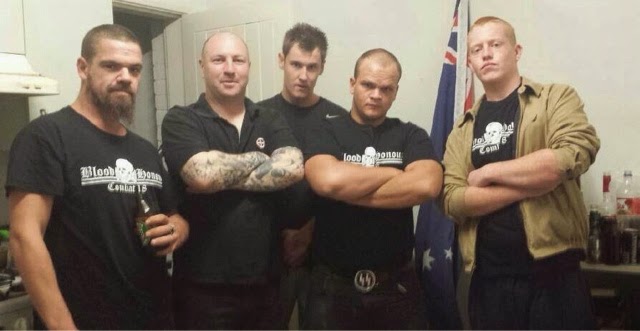 Posted by RezzaAntifa at 02:51 No comments:

All you racists bound to lose

Any of the racist wankers game enough to turn up to the 'Reclaim' rally in Melbourne on the 4th of April should be aware that your rally simply won't be allowed to occur. You're going to crawl back into your holes for another five years when you'll probably emerge to cop yet another smackdown.

Anyone wanting to turn up and a grouse day of working class unity and smashing the fash check out these events and share them widely.


Posted by RezzaAntifa at 22:26 No comments:

On the 4th of April, a bunch of racists of the anti-Islam variety (anti-brown people) are throwing a nationwide series of rallies called 'Reclaim Australia.

The whole thing has been set up by the self-proclaimed 'Great Aussie Patriot' (yes, he's actually fair dinkum). His real name is even funnier, Shermon Burgess. Old mate Shermanator is a long time ADL type, plays in hate-rock band 'Eureka Brigade', has links to neo-nazi group 'Squadron 88' and has a long history of general online racist fuckwittery expressed in videos in which he plays dinky-di dress ups in his mothers basement.April the 4th is the time for Australian antifa to really put up or shut up. It's time for us to really enforce the no platform policy.Anyone who rolls up the shrine on April the 4th with the intent of 'Reclaiming Australia' (btw, how do you reclaim something that isn't yours) is going to be shown in no uncertain terms that there's no room for this bullshit in our society. They'll run back into their dingy racist hovels and retirement homes

Posted by RezzaAntifa at 22:12 No comments:

Posted by RezzaAntifa at 05:28 No comments:

It appears notoriously useless Nazi Patrick O'Sullivan has moved into a flophouse in the Reservoir area or somesuch, away from his usual Collingwood/Fitzroy digs. Either that or he has found another homeless 16 year old minion in the area to boss around/supply with piss in return for sticker runs and token commitment to the bonehead cause . His awful paper Combat 18 'Sink the refugee boats' stickers have been spotted. This is in addition to the C18 graff in Belgrove Street. Loser(s?)
Posted by RezzaAntifa at 19:13 No comments:

Trouble in the Mad Arab's paradise?

The Mad Arab lashing out against his old demented comrade The Skull and his merry band of illiterate Nazis. Watch this space. 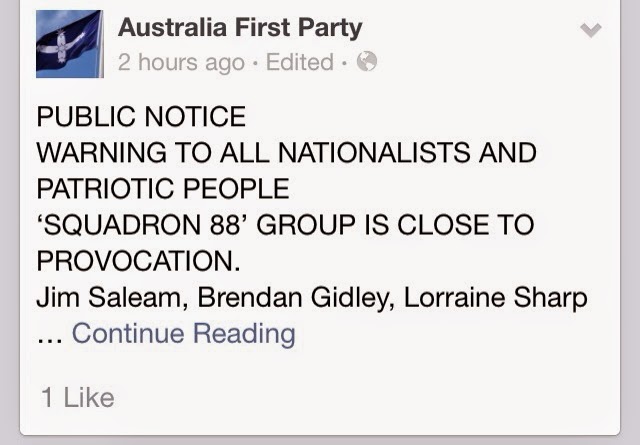 Posted by RezzaAntifa at 18:25 No comments:

A Facebook user who goes by the name 'Richie Richards' (real name Richard Whelan) seems to fancy himself as a bit of an awakened member of the 'master race'. He is part of the cabal that runs the 'European Australian Civil Rights League', is a member of the horribly confused crew of 'national anarchists' over at Nationalist Alternative and loves to spam Facebook groups with links from his buddies over at Whitelaw Towers and Anti-Antifa.

He is also a fat bastard with greasy hair and a penchant for pouting selfies whilst flipping the bird.

Richard went to Camberwell High and a lot of us have seen him round the traps in Melbourne. G'day Richard, hope to see you around fella. 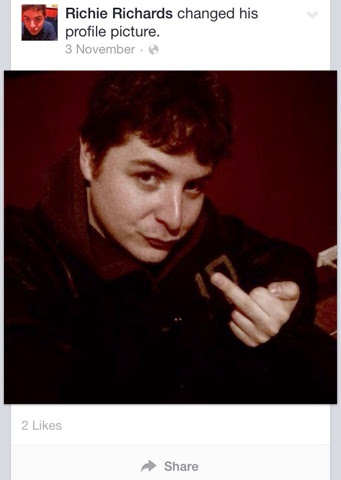 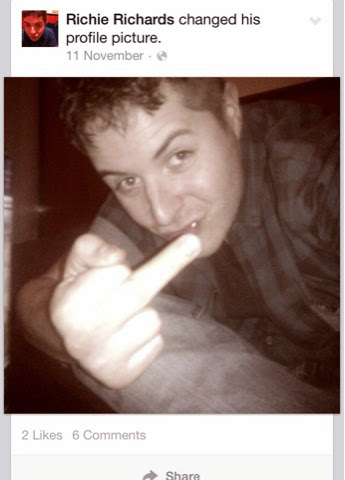 Posted by RezzaAntifa at 22:19 No comments:

Another link in the bonehead chain of fools

A peculiar bunch have been located over on Facebook at the page 'European Australian Civil Rights League', who also use the twitter handle @whiterightsoz. They're a very weird mob who seem to pluck ideas out of their arse completely, from things like classic Nazi sources to things that are batshit on a completely different level like Alex Jones' Infowars.
Also interesting is the fact that this page shares all the material being put up by Whitelaw Towers and Anti-Antifa as part of their 'summer offensive' of sorts, which consists of naming random Melbourne leftists claiming to have cracked the antifa code. I think we can definitely put the 'European Australian Civil Rights League' down as a Victorian/online satellite of the Whitelaw Towers/Anti-Antifa axis.
We can also safely assume the person behind this online grouping got their arse kicked at the Geert Wilders meeting in 2013, as their (long abandoned) blog has a huge preoccupation with Anthony Main.
Both this page and a Bendigo fascist heavily involved with it who goes by the name Jack V Holden on Facebook seem to be alluding that they have a particular interest in someone pictured at the Melbourne Anarcist club on the 'Anti-Antifa' FB page. This particular bloke is known for repeatedly threatening violence on lefties. He very recently created a new FB account and abandoned his old one.
Give him a search on Facebook and have a look through the comments, the same cabal of profiles continue to post similar things.
Keep an eye out for Holden and anyone else who interacts with his page and see if they have the balls to follow through with their trash talk. 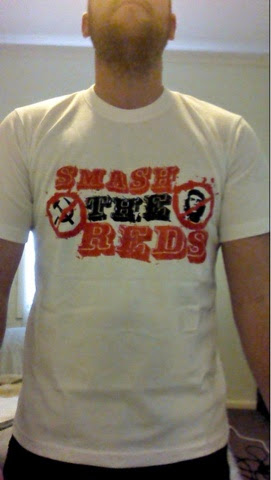 Posted by RezzaAntifa at 03:44 No comments:

The bonehead crew over at 'Anti-Antifa', who seem now to have forged very close links with Jimmy Perren of Whitelaw Towers have identified some fella we've never heard of as the head behind this blog. Kerry King of West Heidelberg is someone none of us have ever heard of. Even in general leftie activist circles. Nice try. At least I guess this carries on the fine Aussie bonehead tradition of misidentifying anti fascist activists. Better luck next time fellas.
Posted by RezzaAntifa at 00:21 No comments:

The flogs over at nazi blog 'Whitelaw Towers' ", run by Queensland nazi and ally of the Mad Arab Saleam, the one and only Jim Perren are seem to think they've pegged some kind of Victorian anti fascist heirachy. Judging by their crap graphic they seem to think this is pointing up to some type of leader.
Which I guess means they assume all of us need some kind of fuehrer ordering us around.
Head over and have a look, will give you a nice giggle.
Posted by RezzaAntifa at 03:20 No comments:

A common thickheaded allegation levelled against anti-fascist activists is that they only seem to strike out against white people. This is patently untrue. They know this. It's an excuse they use. We will forever and a day continue to stand up for, with our words and actions the Tamil community in Melbourne against chauvinist Sinhalese elements, or the Kurdish community against chauvinist Iranian, Syrian, Iraqi or Turkish elements. These are but two examples.
Posted by RezzaAntifa at 02:26 No comments:

The Queensland based flogs at 'anti-antifa' appear to be back in action after an 7 month hiatus. Head over for some bonehead laughs, their 2/10 banter really needs to be seen to be believed. Makes UK Redwatch look actually threatening.
Posted by RezzaAntifa at 21:56 No comments: